After two successful editions, the Limburg Trombone Ensemble organizes on Saturday 6 may 2017, for the third time a Trombone day at ADAMS muziekcentrale in Ittervoort.

Trombone Day 2017
After two successful editions, the Limburg Trombone Ensemble is organising its third Trombone Day on Saturday, May 6th 2017, at Adams Muziekcentrale in Ittervoort . The day is devoted to the theme of talent development and inspiration and will be full of musical activities for trombonists of all ages, regardless of level.

Workshops
During the Trombone Day, trombonists will get the chance to work with leading trombonists such as Martin Schippers (tenor and bass trombonist in the Royal Concertgebouw Orchestra), Thomas Horch (solo trombonist of the Bavarian Radio Symphony Orchestra ) and Armin Bachmann (Slokar Quartet, among others). Participants will go to work intensively with these trombonists during the workshops and can count on an unforgettable experience.

Closing Concert
The Trombone Day at ADAMS Muziekcentrale will be concluded by a concert of the Limburg Trombone Ensemble, under the direction of Sandor Hendriks in collaboration with the guest teachers. The closing concert starts at  ± 16:30 hours at Muziekcentrale Adams in Ittervoort and admission is free.

First Thomas Horch was student of Hans Kuhner (Radio Symphony Orchester Frankfurt), later of Prof. Branimir Slokar at the Staatliche Hochschule für Musik in Cologne. It was already during his studies - then 22 years old - that he was called upon to play the principal trombone in the Berliner Philharmonisches Orchester under Herbert von Karajan.

In 1990 he went to the Symphonieorchester des Bayerischen Rundfunks in Munich after he had been the first German trombone player to be awarded in the history of the International Music Competition of the ARD.

After that, quite a number of different audio productions as well as commissioned compositions appeared. The close cooperation with the Turkish composer Betin Güneş resulted in two pieces for Thomas Horch, "The Trombonite" for alto trombone and piano appeared on his first solo album.In 1997 a recording of "YAZ" was made – a virtuoso but at the same time meditative work for tenor trombone and strings. "Thomas Horch knows how to creatively and colourfully expand the limits of his instrument." (Fono Forum) "… with this CD he joins the ranks of the worlds best trombone players" (D. Stepphuhn, "Das Orchester"). In the course of time, he started to particularly favour the alto trombone and you need not hesitate to call him an expert of this instrument. In 1994, he recorded a selection of pieces of the baroque period for alto trombone and organ to which the famous Swiss organist Hannes Meyer contributed his work "Baroque Bolero". "His playing displays very good intonation and technique with a slide upper range. His legato is first class, his articulation is very clean and his dynamic control from soft to loud is very professional" (L.Weed, Valencia State University).

The fact that he has been a member of the "German Brass Ensemble" and the "Münchner Posaunenquartett" for many years, shows that he is also very interested in chamber music. As a trombone player and arranger he was responsible for two highly noticed CD productions "… an album that every trombone player should have" (L. Campbell, Louisiana State University).

For many years, he has furthermore closely and intensively worked together with the Yamaha Corporation/Japan in the field of building musical instruments, which led to the development of a German trombone (YSL 603). In 2004 the new tenor trombone model "XENO" was released, which had been built and designed under the overall control of Thomas Horch. It goes without saying that such a great musical experience and ambition are also asked for in teaching students to play their musical instruments perfectly. This is why Thomas Horch has already been teaching in masterclasses in many parts of the world. So he for example gave masterclasses at the "Pacific Music Festival" in Sapporo/Japan, the Spanish National Youth Orchestra (JONDE), the "Spanish Brass Academy", Valencia, the Conservatory of Tel Aviv/ Israel, the States Conservatory of Tiblissi/Georgia, the "Junge Deutsche Philharmonie", the "German Brass Academy", the Julliard School of New York. For several years now, he has also been teaching at the "Hamamatsu International Wind Festival" of Hamamatsu/Japan. Besides professor Thomas Horch teaches at the Hochschule für Musik und Theater in Munich

Began his musical career at the age of 7 on tenor tuba and was taught by his grandfather. At the age of 15, he switched to trombone and was taught by his uncle, Hans SCHIPPERS. Two years later he went to study at the Rotterdam Conservatory. In his second year at the Conservatory he was appointed second trombonist with the Radio Philharmonic Orchestra. From 2005 he was solo trombonist of the Radio Chamber Philharmonic. Since april 2009 is Martin second/bass trombonist with the Royal Concertgebouw Orchestra. As a member with the New Trombone Collective (up to 2010) and the International Trombone Ensemble, he has played on many international stages. Over the last years, Martin has become a versatile musician and is active on multiple instruments and in different music styles.

Sandor Hendriks (1974) began at the age of 7 to play the flugelhorn at fanfare St. Wiro. He exchanged this instrument for the trombone at the age of 13. Began in 1992 to his trombone studies at the Maastricht Conservatory, and obtained his Master at the Musikhochschule Aachen. During this study, Sandor was in the season 1998-1999 employed at the Duisburger Sinfonikern – Deutsche Oper am Rhein. While studying, he played in various professional orchestras and was invited in 1997 for the Schleswig-Holstein Musikfestival Orchester. Since september 1999, Sandor has been appointed as principal trombone with the ZuidNederland Philharmonie. In addition to these permanent position Sandor is also active with Chamber music. Since 2000 he is conductor and founder of the "Limburg Trombone Ensemble". He plays with his fellow students and friends in the Brass quintet "Southern Brass" and played years in the renowned large brass ensemble "Flexible Brass".  For several years  Sandor has been frequently asked as a coach with wind bands all over Limburg and beyond.

"when energy sounds, and the passion is played as a melody, I feel good."

With this statement by Armin Bachmann, expression is given a large part of his passion.
His studies, which he completed in Switzerland and Germany, are years of journey, lasting to this day. Trombonist in orchestras in Europe, Member of numerous Chamber music ensembles such as Swiss brass consort ensemble contrasts Nuremberg, Duo Pazzo Munich etc, conductor of brass and wind bands, soloist with Symphony brass orchestras and wind bands, organ or folk band, jury member at international competitions, Professor at the Hochschule für Musik "Franz Liszt" in Weimar, with master classes in Tokyo, Paris, Manchester, Vienna, Munich, Helsinki, Lugano etc., Director of the music school region Burgdorf , Presenter of various workshops, conductor of youth formations, speaker and moderator at concerts. In addition over 45 recordings of CD of, live appearances on radio and TV stations, world premieres of several contemporary works, passionate Alphorn players and casual - Euphonium. Great passion for the Slokar trombone Quartet with which he has performed since 1983 together with his former teacher Branimir Slokar around the globe. The canton of Solothurn Armin Bachmann has 2012 awarded the price for music. Armin Bachmann lives his passion!

Bram Peeters has been playing trombone since his 10th. He studied at the Conservatory of Maastricht and Rotterdam. During his studies he was a member of the Netherlands Youth Orchestra, National Youth Orchestra and the Gustav Mahler Jugend Orchester and he followed masterclasses with many renowned trombone players. Because of an extraordinary interest in early music, baroque trombone, he went to study at the Hochschule für Musik Aachen. Since 2003 he has been solo trombonist with Holland Symfonia in Amsterdam. 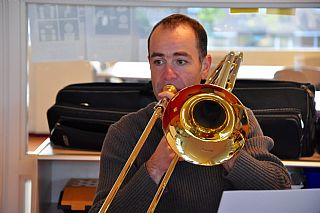 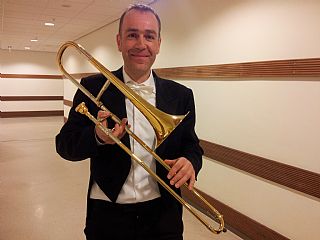