Zhengdao Lu joined at Shenyang Conservatory of Music in 2008. After served in China National Opera Symphony Orchestra since 2007. A graduate of the Central Conservatory

As an active percussionist soloist,he’s performed in Asia, North America and  Europe. Zhengdao made his debut at the National Center for Performance Arts Concert Hall in 2008 as concerto soloist with the China National Symphony Orchestra for the 2008 Olympic Music Season.  and appeared in many major concert hall of China as a concerto soloist since than. He has performed as both soloist and chamber musician at countless music festivals and events, he is also the founding member of ‘Striking’ Percussion Ensemble, and play a Duo ‘LL’ with Simon Lin regularly. He can be heard as a soloist from Naxos Recordings as well. As a member of the National Opera Orchestra, he has performed in every major concert hall and opera theater in China–and also has been a part of orchestra tours to Europe, USA, Africa, Middle East and East Asia under the baton of many great maestros. He has also appeared as guest timpanist at major

As a Clinician and Educator, he gives Clinics around Asia and North America,.

He was a prize winner awarded at 2nd Universal Marimba Competition in 2004.

He is representing as Adams Percussion Artist, plays on Adams Timpani. And JG Percussion I artist and Han Percussion artist. his Signature timpani mallet line made by JG Percussion and Snare drum sticks made by Han percussion of China. 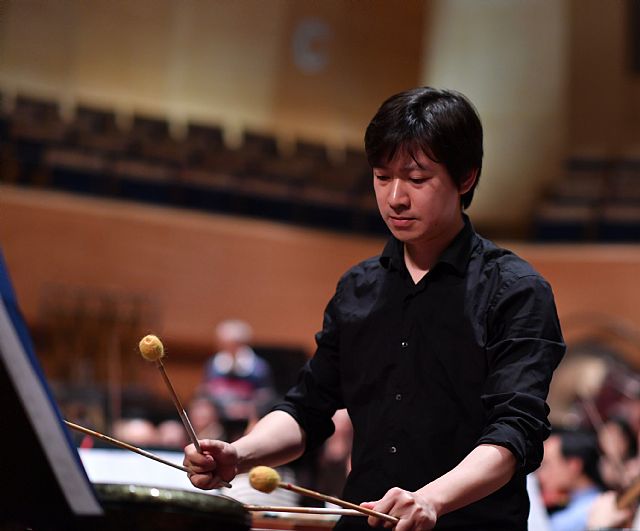