Alexander Kamenarov | Johannes Eder | Rupert Struber | Georgi Varbanov The percussion ensemble, with its international membership and which was founded in Salzburg, has made a program of its name: From the very beginning the four young musicians desired to explore new pathways with their instruments, in order to increase awareness of the variety of sound possibilities of the often underrated percussion instruments.

During televised performances of the MDR und ZDF, at live radio clips by the SWR and Ö1, and at innumerable concerts, the artists were able to convince the audiences and critics of great festivals such as the Festival Echternach, the Salzburg Festival, the Carinthische Sommer, les muséiques (Switzerland), the Chamber Music Weeks of Sofia, the Finca Festival Gran Canaria, the Musicastello (Italy), the Taipei International Percussion Convention, the Hong Kong Drum Festival, and many others, of their exceptional talent. Whether together with chorus, orchestra, instrumental or vocal soloists, or on their own, the ensemble repeatedly succeeds in impressing its audience thanks to its sensitivity for the most varied styles, its variety of expression, and its strong presence on stage.

The Via Nova Ensemble always remains faithful to its name, however, and is constantly expanding its repertoire through commissioned compositions and demanding arrangements.

For instance, the newspaper Luxemburger Wort wrote about the interpretation of Bach's Fugue Nr. 20 from the Well-Tempered Clavier, Vol 1, that “it is practically impossible to play Bach any better on percussion instruments”. The quartet is also a sought-after partner for projects combining the arts: Via Nova worked in 2006 and in 2007 together with the photographer Konrad Laimer and the composers Eduard Demetz and Herbert Grassl.

This sound group mixes a large repository of ideas with a sense of authentic music-making. It was honored in 2005 at the International Percussion Competition Luxembourg, where Via Nova obtained the First Prize as well as two other awards. The greatest recognition, however, is awarded the quartet by the audience: “The audience went wild. Three standing ovations provided encores, one more exciting than the last. A superlative evening of percussion! We hope to hear you again soon, musicians of the Via Nova Percussion Group!“ Via Nova plays exclusively on Adams Musical Instruments. 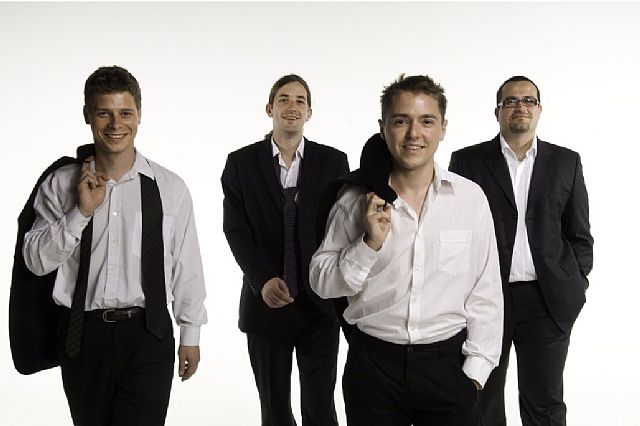