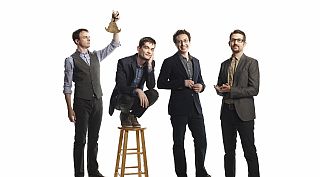 Hailed by The New Yorker as “vibrant” and “superb,” Third Coast Percussion explores and expands the extraordinary sonic possibilities of the percussion repertoire, delivering exciting performances for audiences of all kinds. Since its formation in 2005, Third Coast Percussion has gained national attention with concerts and recordings that meld the energy of rock music with the precision and nuance of classical chamber works.

These “hard-grooving” musicians (New York Times) have become known for ground-breaking collaborations across a wide range of disciplines, including concerts and residency projects with engineers at the University of Notre Dame, architects at the Frank Lloyd Wright School of Architecture, astronomers at the Adler Planetarium, and more. The ensemble enhances the performances it offers with cutting edge new media, including free iPhone and iPad apps that allow audience members to create their own musical performances and take a deeper look at the music performed by Third Coast Percussion.

Third Coast Percussion is the Ensemble-in-Residence at the University of Notre Dame’s DeBartolo Performing Arts Center. They have the honor of being the first ensemble at the University of Notre Dame to create a permanent and progressive ensemble residency program at the center. The ensemble performs multiple recitals annually as part of the DeBartolo Performing Arts Center’s Presenting Series season. Third Coast Percussion assumed the position of Ensemble-in-Residence at Notre Dame in 2013.

Third Coast’s passion for community outreach includes a wide range of residency offerings while on tour, in addition to a long-term residency with the Davis Square Park Community Band on Chicago’s South Side. In addition to its national performances, Third Coast Percussion’s hometown presence includes an annual Chicago series, with four to five concerts in locations around the city. The ensemble has collaborated in concert with acclaimed ensembles Eighth Blackbird, Signal, and the Garth Newel Piano Quartet, pianists Amy Briggs and Lisa Moore, cellists Nicholas Photinos and Tobias Werner, flautist Tim Munro, vocalist Ted Hearne, and video artists Luftwerk. 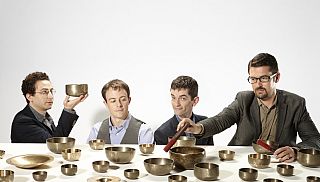 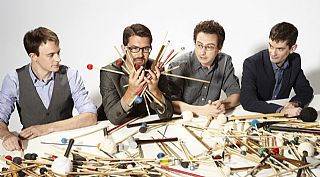