He was born in 1987 and belongs to a fourth-generation percussion family. Claudio started studying music at the age of six thanks to his parents, both percussion teachers at the Conservatory, and he soon showed a great, natural technical and musical mastery of the xylophone.

For his virtuosity, at the age of eight he participated in the International Competition for child prodigies, "Bravo Bravissimo", held at the prestigious Teatro "A. Ponchielli" in Cremona and broadcast on Rete 4 in Italy and all European television networks. Playing pieces of remarkable technical difficulty for his age, he won over many National and International Competition Boards, winning numerous first prizes.
He was awarded the President of the Italian Republic's "Silver Medal" and a special acknowledgment for his talent by the Yamaha Foundation that awarded him a prize in the edition dedicated to the best Italian percussion students, held in Milan in January 2001 with Nebojsa J. Zivkovic, the Board President. Because of these important prizes, the mass media have had him as a guest many times on Italian television broadcasts. His extraordinary talent and two-mallet technique, enable him to play the marimba with four mallets, like a pianist. His compositions are easily appreciated by listeners, though presenting significant technical difficulties greatly appreciated by performers. In 2005, he performed a Duo with his sister Francesca at the Superior Conservatory in Paris during the "perKumania" Festival in the "Jeunes Interprètes Européens" Exhibition with the piece "Specchio", written and dedicated to the duo by the Italian composer, L. Marinaro (published by I.P.E.). Despite his young age, Claudio has been invited to numerous international festivals: in France, Croatia, Spain, Lithuania, Romania, Germany, Bulgaria.....

At the age of 18, he recorded the Concert for Marimba and Orchestra by T. Procaccini, with the Ukraine National Symphonic Orchestra and, in a Duo with the author, pieces for Marimba, Vibraphone and Piano ( ed.EDIPAN). For the brilliant character of the repertoire performed in his concerts and for the particular virtuosity highlighted in each performance, he has met with great public and critical approval everywhere. Even though very young, Claudio, who carried out his studies with his father Antonio at the "G. B. Pergolesi" Conservatory in Fermo, has composed numerous pieces for marimba solos and two Concerts for Marimba and Orchestra. His compositions are published by: "Beurskens Music Editions" (Holand) and "Italy Percussion Edition" (Italy). Has won the 12th ed.2011 of the "Premio delle Arti / Arts Prize", a musical interpretation competition, organized by Ministry of Education, Universities and Research. 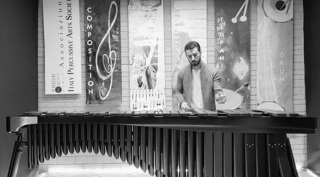