In a career spanning two decades, drummer John Tempesta has built a body of work that's deservedly earned him a place among metal's most popular and well-respected players. Perhaps best known for his tenure with Rob Zombie - both in White Zombie and with Rob's solo project - John worked his way up through the drumming ranks, always looking for his next challenge and never resting on past achievements. John's extensive professional resume includes gigs with Exodus, Testament, Zakk Wylde's Black Label Society, Tony Iommi, Helmet and Scum of The Earth (which features John's brother, guitarist Mike Tempesta). Presently, John can be found touring the world behind the drum throne of The Cult.

Growing up in the Bronx, John was first inspired to play drums as a child after watching the classic Beatles' film, A Hard Day's Night on TV. "I thought that Ringo Starr looked so cool," he remembers. "I knew right then that I wanted to be a drummer." A short time later, John heard that a neighbor was selling a drum kit and he begged his mom to let him buy it for the price of $25. "It all happened from there," says John. In 1977 John attended his first live concert when he went to see David Bowie at New York City's Madison Square Garden. There, he was blown away by Bowie's drummer, Dennis Davis. "Dennis was amazing," says John. "He was such a soulful, groove player but also a total rock drummer. Dennis Davis became my first major drum influence."

Coming up, John was further influenced and inspired by the techniques of hard-hitting rock drummers like John Bonham of Led Zeppelin, Alex Van Halen and Bill Ward of Black Sabbath - one of John's favorite bands. "Besides Van Halen and Black Sabbath, I saw so many great shows as a kid. Being in the crowd, under the lights with the smoke and the sound - I got so inspired. That kept me very focused on my goal," he admits. As John began to experiment stylistically, getting into progressive rock and fusion, Terry Bozzio became another important influence along with prolific session drummers like Simon Phillips and Cozy Powell.

Early in his career, John gained crucial experience on the road and in the studio as drum tech for Anthrax's Charlie Benante. "Charlie definitely taught me how to approach playing thrash metal, because I wasn't that type of drummer," says John. "From watching his double bass technique, I learned so much about how to improve my speed and accuracy. I owe a lot to Charlie for his help." In 1989, after four years with Anthrax, John moved behind the drum throne of Bay Area thrash metal stalwarts Exodus, with whom he recorded three albums. He then joined cross-town rivals Testament. Although he recorded only one studio album with that band (1994's Low), John left a lasting impression on guitarist Eric Peterson. "John is definitely one of the best drummers in the country," Peterson remarks. "He has the power of John Bonham, the finesse of Carter Beauford, and the aggression of Dave Lombardo. As a drummer, John really has it all."

John's profile grew in 1994, the year he joined industrial metal juggernauts White Zombie. The release of 1995's Astro-Creep 2000 made White Zombie a household name, largely due to the dance club hit "More Human Than Human" and its accompanying video. "John was the best," says former White Zombie bassist Sean Yseult. "White Zombie toured quite a bit with Pantera, and besides Vinnie Paul, there were no drummers that could compare to him. He's like a machine, but brutal. You rarely hear such a hard hitter with such speed, detail and finesse." Rob Zombie liked John's playing so much that after White Zombie split up in 1997, he kept him on as drummer for his solo band. Playing with Rob Zombie also gave John the freedom to drum on albums like Black Sabbath guitarist Tony Iommi's self-titled solo record, as well as Black Label Society's Hangover Music Vol. VI.

When Rob Zombie put his band on hiatus in 2003, John wasted no time landing his next gig. But he never imagined he'd become a core member in the new version of Helmet, one of the '90s' most influential metal bands. The way he tells the story, it was all about timing. "I was kicking around the idea of playing with other people when I was introduced to [Helmet guitarist/ singer/songwriter] Page Hamilton," John explains. "Page was in LA looking to put a new band together. I had been a longtime fan of Helmet as well. After talking on the phone, we met at a bar for a couple beers, and he brought me a demo CD of his songs."

Once Page and John jammed together, they discovered an undeniable musical chemistry. With the participation of producer Jay Baumgardner (Papa Roach, Drowning Pool) and bassist Rob Nicholson the two recorded demos that attracted the interest of Interscope Records, and Helmet was reborn. John then recorded all drum tracks for Helmet's first album of new material in seven years, Size Matters (released in the fall of 2004). "Page is an amazing musician," John offers. "In the long run, playing with him and learning so much from him about the development of music really made me a better player." John toured the States and Europe extensively with Helmet for nearly three years, at which time he reached a professional crossroads where he was presented with an opportunity that was too good to pass up.

"A friend of mine who is a booking agent for The Cult told me that they were auditioning drummers," John remembers. "At that time I was lined up to record another album with Helmet, and I was also scheduled to go to Dubai to play with Testament. It was one of those things where everything happened in a week. After securing the audition, I learned all of the Cult material that I'd need to play and I felt really confident about the audition, because I'd always been a fan of The Cult. It just clicked, basically." After a couple of auditions, John landed the gig in February of 2006 and has been touring the states, Europe, the UK and South America with The Cult ever since.
"As a drummer," John confesses, "being in the Cult is great for me because I get to play really heavy, but I can play soft as well because there are so many dynamics in this music. It's definitely a change for me from just full out thrashing with Testament or playing all of the loops with Zombie. It's a nice progression and I really enjoy the music. I'm really happy to be with these guys because they've been one of my favorite bands and a big influence on me for many years. The funny thing is I had planned to audition for The Cult in 1993," he recalls. "But then I ended up touring with Testament, and after that I got the White Zombie gig, so timing, again, really is everything."

John is also proud to announce the availability of his new signature snare drum, The John Tempesta Stealth Snare by TAMA. "I've been working on this drum with TAMA for a while and had the prototypes on a couple of tours with Helmet," John Explains. "I toured with it for a year until we perfected the design, so I put a lot of work into the drum and I'm really proud of it." The Stealth Snare measures 7"x14" with black nickel plate finish over a 2 mm brass shell, and was designed with heavy hitters in mind. "Not only does it have my name on it, but it's also a snare drum that I will always play," he continues.

John's drum clinics have taken him as far away as Moscow - where he performed at Zildjian's Day Out - and Australia. "To play in front of different people around the world - because everyone appreciates music - is really gratifying," John confesses. "Participating these clinics has also given me a chance to play with some great drummers like Dave Weckl, Virgil Donati, John Blackwell, Chad Wackerman, Dom Famularo and many other incredible musicians." 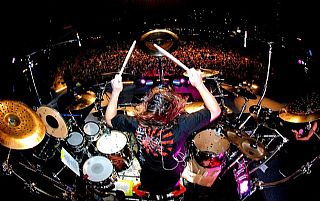