Mr.Yadi Li was born in 1991 in Shandong, China. He began playing the tuba at the age of 13 when he attended the Central Conservatory of Music Middle School and studied with the former professor of the Central Conservatory of Music, Hu Bingyu. Upon graduation, Yadi received a full scholarship and started studying at Yong Siew Toh Conservatory of Music (YSTCM) of the National University of Singapore under the guidance of the Principal Tubist of the Malaysian Philharmonic Orchestra, Brett Stemple. Soon after graduation, Yadi won the tubist position of the China National Symphony Orchestra (CNSO).

Beside performing solo and with symphony orchestra, Yadi is also an active chamber musician. He has performed with various brass quintets and has collaborated with the Boston Brass and Australian Brass Quintet. He is the current tubist of the CNSO Brass Quintet. 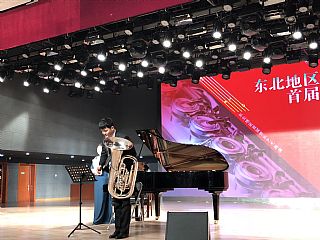