Already during his early years at the Codarts University for the Arts (Rotterdam), trumpeter Teus Nobel started touring all over Europe with the Rotterdam Ska Jazz Foundation. They played in clubs an festivals in a.o. Italy, Germany, Poland, Czechia and Russia and received international praise for their album “Motif Loco” (2007). A period in which Teus also became an in-demand player in the commercial music scene, playing over 600 shows of theater- and musical productions like Grease, Fame, Footloose, Wicked and Saturday Night Fever. 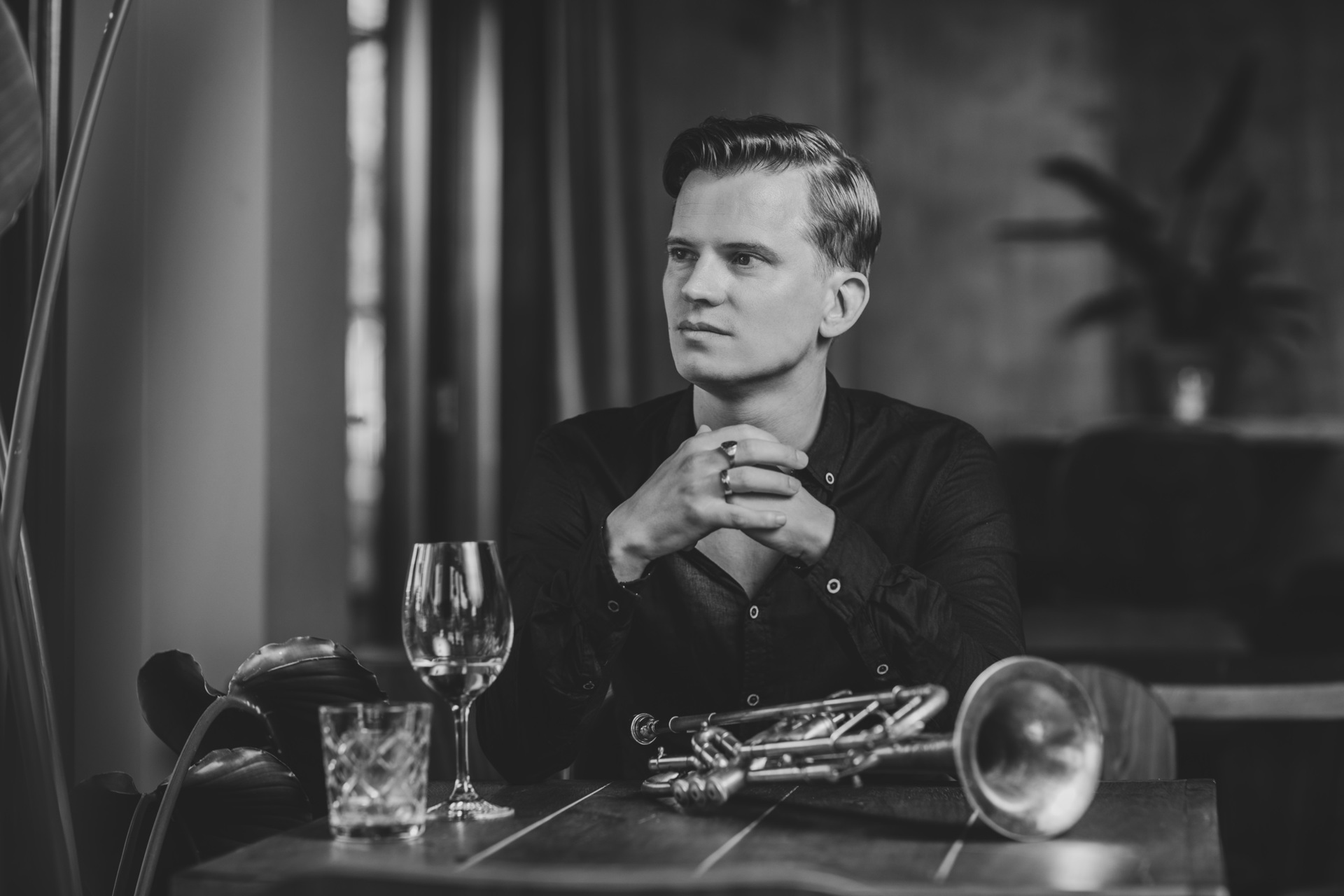 In 2010, Teus joined the dutch Royal Airforce Orchestra as their jazz soloist. Together with the renowned Metropole Orkest, this orchestra is the only fulltime jazz- and pop-orchestra of the Netherlands. Teus would turn out to be their trumpet soloist for 9 years straight and contributed multiple of his compositions to their repertoire.

In the meanwhile, still in 2010, Brittish producer Simon Sixsmith added Teus to his studioproject Black Gold 360, recording the albums “LM6iX” and “20 Country Love Songs”. These freeware albums were downloaded over 500.000 times worldwide and the list of praising reviews was endless. A new Black Gold 360 production, “Postcards From The Revelator”, will be released in 2020.

In 2012, Teus released his first solo album, an album called “Flow”. The album featured several dutch artists, including alto star Ben van Gelder. The band was welcomed as a ‘fresh and wayward quintet’ (newspaper Parool) and an ‘interesting new group’ (magazine Jazzism) and Teus was called out “Soul & Jazz Talent” bij Radio 6. The album single “Shifting Expectations” was #1 in the iTunes jazz charts for over a week and Teus’ Liquid Music Quintet made their appearance in multiple radioshows, introduced as the ‘new kid on the block’.

He had made his mark as a jazz player and started working with multiple renowned artists during the second decade of this century, including Caro Emerald, The Kyteman Orchestra, Qeaux Qeaux Joans, Trijntje Oosterhuis, Hans Dulfer, Ntjam Rosie and many others. Others like for example American soul legend Frank McComb (Buckshot LeFonque), with whom he boldly jumped on stage in 2013 to play a solo on his hit-song “Another Day”. After this specific concert had ended, McComb stated ‘from now on, you are with ME’. This resulted in multiple concerts with McCombs quartet, including the Klaipeda Castle Festival in Latvia, and an appearance on McCombs album “Another Love Story” (2016).

In 2014, Teus released his second album, “Legacy”. With a fully renovated band, he honored the legacy of his trumpet heroes, such as Roy Hargrove, Christian Scott and Woody Shaw. Ilja Reijngoud (trombone) and Ben van den Dungen (tenor) made guest appearances on this new album, which was again welcomed with praising reviews and a Laren Jazz Award (2015). Teus made his first appearances on television as a composer and bandleader, performing his music in “Vrije Geluiden” and “De Wereld Draait Door”.

Album number three followed in 2016. A cooperation with producer/composer/multi-instrumentalist Merlijn Verboom resulted in the album “Social Music”. The title refers to a Miles Davis quote in which he preferred to call jazz ‘social music’. Their ‘dirty electronic jazz’ album made a blend between electronics and acoustic instruments like violin (Yannick Hiwat), bass clarinet (Joris Roelofs) and bassoon (Bram van Sambeek). With the Social Music quintet and Hiwat on violin, Teus made his debut as a bandleader on the North Sea Jazz Festival (2016).

In August 2018, Teus was featured as guest soloist with the Jazz Orchestra of the Concertgebouw. In the (sold-out) big hall of the renowned Concertgebouw and with Yuri Honing on tenor, they performed the concert “A Tribute To Miles Davis” – including Teus’ original composition “Quiet Now”, arranged for bigband. 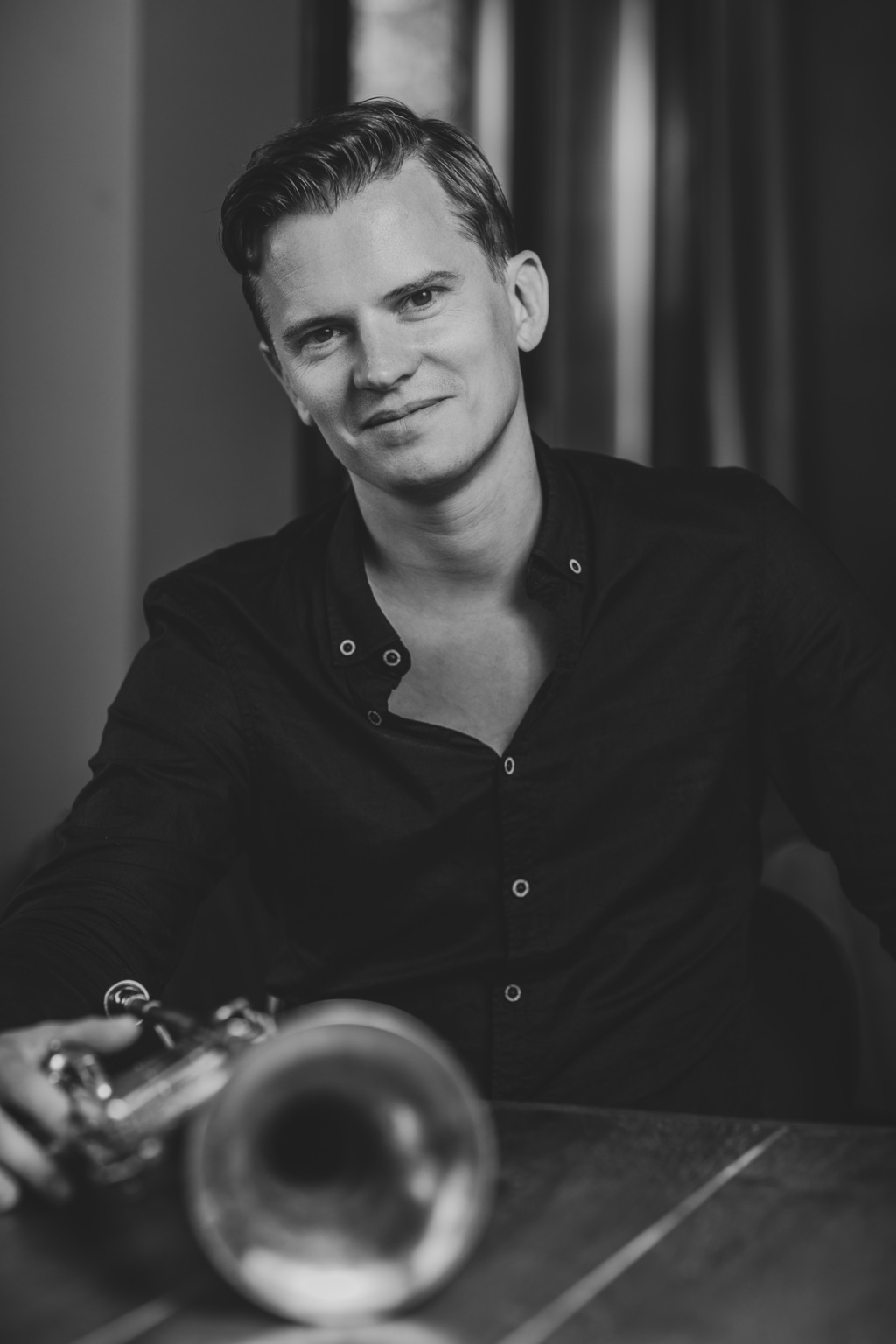 A turbulent 2019 started with the release of a fourth album, “Journey Of Man”, dedicated to the birth of Teus’ son Bix Nobel. ‘The album that underlines his breakthrough’, as stated by newspaper NRC. Newspaper De Volkskrant awarded the quartets concert at the Bimhuis (Amsterdam, only 4 days after the birth of Bix) with a 5-star review, stating that it was ‘one of the finest experiences a jazz lover could wish for’. Album number five “Saudade”, including a big string section, was released in December of that same year, sadly enough dedicated to the loss of his father. The album featured music of Brasilian composer Antonio Carlos Jobim. A step in a new direction, which was nonetheless appreciated by the press: “Teus Nobel keeps surprising us with his versatility” (newspaper De Volkskrant), “Nobel grants us with a surprise here” (newspaper Nederlands Dagblad).

In between releasing these two albums, Teus decided to quit his job at the Royal Airforce Orchestra after nine years of employment, with the intention of fully aiming for an international career as freelance jazz soloist. In favor of supporting his ambitions, he founded the Liberty Music Foundation.

Early 2020, a new professional bigband entered the dutch music scene: Paradox Jazz Orchestra. As co-founder and solo trumpeter of the bigband, Teus Nobel and his musical partner/arranger/bandleader/ Jasper Staps aim for keeping a century of bigband legacy alive for the dutch audience.

Since September 2020, Teus is connected to the Academy for Music and Performing Arts (AMPA) in Tilburg, as a trumpetteacher for their jazzdepartement.