“Tuopali Duo” was founded in the year 2000 with the purpose of spreading knowledge about repertoire originally written for percussion while combining it with different kinds of artistic expression. They also give concerts on their own in Tenerife, Gran Canaria, Mexico, Cuba, Argentina, etc. They have performed as soloists with the Tenerife Symphony Orchestra and participated in the Villa de Benigñanin Percussion Festival (in Valencia). In 2006 the duo took part in the inauguration concert of the “International Summer Academy for Marimba & Percussion” organized by the percussionist and composer Nebojsa Jovan Zivkovic in the “Landesmusikakademie” of NEUWIED-ENGERS 2006.

With regards to their teaching efforts, they have been invited to give master classes and courses in several countries all over the world, striving to make percussion known and to bring the knowledge of some of the most important percussionists in the world to our country, namely Rainer Seegers, Victor Mendoza, N.J. Zivkovic, Katarzyna Mycka, and Julio Cesar Barreto, with whom Tuopali Duo collaborates regularly.

Since the year 2002 there has been a close collaboration with the composer and percussionist N.J. Zivkovik (International Soloist) which bore fruit in the 2004 CD recording “Mestizaje” by Tuopali Duo.
They won First Prize in the “Concurso Regional de Música de Cámara de Caja Canarias” and Second Prize in the “Concurso de Percusión Vai-Moana”, and also collaborated with the Orquesta Sinfónica de Nuevo León Monterrey, Mexico. Since 2008 Tuopali Duo is sponsored by the company InnovativePercussion, one of the main international brands of percussion drumsticks.
In November 2009 they were invited to participate in the International Percussion Festival in Tatuí in Sao Paulo (Brasil) where they also gave master classes.
In the same year they played the international premieres of the pieces “Tribal” (J.V. Egea), “Son del Volcán” (Victor Mendoza), and “Sex in the Kitchen” (Nebojsa Jovan Zivkovic). The last two works were commissioned by the Auditorio de Tenerife and all three were written for and dedicated expressly to Tuopali Duo. As a result of these premieres, they keep in close collaboration with the composer, educator, and vibraphonist Víctor Mendoza (professor in Berklee and international soloist).

In the summer of 2010 they were invited to play a concert tour in Germany and Serbia and to give lessons in the “International Summer Academy for Marimba & Percussion” organized by the percussionist and composer Nebojsa Jovan Zivkovic in the “Landesmusikakademie” of Neuwied-Engers 2010. In November 2010 they were invited by the Centro Cultural de España in Lima, Peru, to inaugurate the eighth edition of the Festival de Música Clásica Contemporánea in Lima, as well as giving master classes in the national conservatory in the same city.

They recently presented their second CD “SEX IN THE KITCHEN” as well as organizing the “III Festival de Música Contemporánea de Tenerife”.

They are Artists for “Adams Percussion Instruments”. 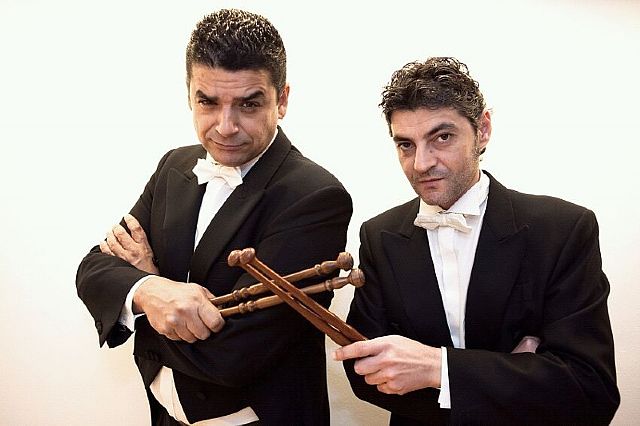