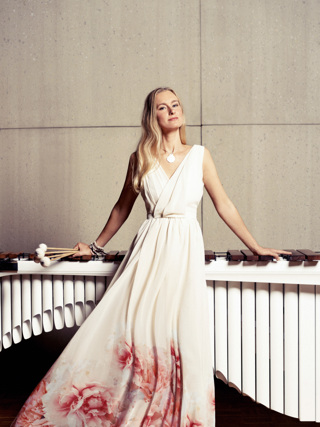 As a Marimbist/Percussionist/Drummer/Theatre Performer/Producer/Backing Vocalist, Laura always felt the love to accessory something to her performances. Jury’s praised these performances as “An impressive performance of total theater.” And “Whenever she is on stage, something magical happens” - Jury Prix du Port 2009, Prins Bernhard Cultuurfonds 2019. This magical mixture of music and theatre, made her walk a different path and resulted into the performer Laura is nowadays.

Laura graduated high school, Bachelor and Master at Codarts, Conservatory of Rotterdam with Hans and Chris Leenders, Tatiana Koleva, Ramon Lormans, Rene Spierings and Niels Fischer with a 9 and 9,5. During her study’s she participated in competitions and won several final, jury, audience and press prizes at the Princess Christina Concours (2005, 2007, 2009), MCN prize for best performance of modern music 2009, Eurovision Young Musician 2007, Prix du Port 2009, the YAMAHA Percussion Scholarship 2013, the Grachtenfestival Conservatory Concours 2013, Grote Kamermuziek Prijs in 2015 and 2 nominations in the top10 Benelux POP percussionists of the Slagwerkkrant Polls 2018 and 2019.

After she got admitted to the Orchestra Academy of the Rotterdam Philharmonic, she became a regular guest player with the Radio Philharmonic, Nederlands Blazers Ensemble, Ballet Orkest, Asko|Schonberg ensemble, Slagwerk Den Haag and toured in Austria, France, Belgium, Germany, Bulgaria and North America.
Laura attended masterclasses by Raymond Curfs, Bogdan Bacanu, Julie Spencer, Emmanuel Séjourné, Keibo Abe, Tchiki Duo and festivals like YPP Bulgaria 2010, ZMF 2010. Percussion Friends 2016 and Classical Next 2017.
Thanks to the masterclasses, festivals and awards, Laura became a frequently asked soloist in De Doelen Rotterdam, Rotterdamse Schouwburg, Concertgebouw Amsterdam, Tivoli Vredenburg, and started to appear regularly on Radio and TV in various news and music programs like Maestro, Podium Witteman, DWDD, It Takes Two, Podium on Tour, Koffietijd, Tijd voor Max, Het uur van de Wolf, Spijkers met Koppen, all (live) broadcasted on Radio1, Radio4, NPO, VPRO, VARA, BRAVA, BNN, NTR and RTL 4. Some of these programs broadcasted Laura as a soloist with the National Youth Orchestra in 2005, Rotterdam Chamber Orchestra in 2007, National Ballet Orchestra in 2016 conducted by Jurjen Hempel, Conrad van Alphen and Ivan Meylemans. Thanks to this visibility Laura got an invitation by the VPRO, to make an episode for an educational tv program called Klokhuis in 2016, where she educated children about classical percussion and concerts.

Laura felt the urge to explore her own ideas and music. This resulted in Lip Stick Percussion Duo, which Laura founded in 2015 with her best friend and Spanish percussionist Maria Martpay, where they mixed classical percussion with theatrical elements and a feminine touch. Slowly she expanded her expertise in the classical/pop and theatre field and she started working at the Toneelgroep de Appel, Cabaret duo Harteveld en Fretz, Theatre Hotel Courage, Hotel Modern, ISH dance collective and more. This resulted in permanent positions as a drummer at Herman van Veen's production, percussionist with Neo Fanfare 9x13, percussionist for the Toppers in Concert, drummer/percussionist/backing vocalist with Thomas Acda and performer/percussionist at the production GOUD from the Dutch National Opera and Ballet.

Laura is a very experienced teacher with students in different ages, special needs children, and children with learning challenges. She also became a permanent jury member of The Dutch Music Competition for children aged 0-12 years. With her eagerness and passion, she creates a pleasant environment that allows the student(s) to feel serene and safe for their musical and personal levels to increase. This way of teaching had deepened her interest in the human mind, (quantum) physics and consciousness and brought her towards the teachings of Eckhart Tolle, Rajshree Patel, Michael Pilarczyk, Deepak Chopra, where she explored her musical approach with meditation, mindset and consciousness. This developed into her own company: Innersea Company, from where she will combine these ingredients into her music theatre performances. Her dreams and aims are to make her audience feel, that they have the ability to live a healthy, connected and loving life. Together with director Jos Groenier, composer Vanessa Lann and Neil Wallace as the producer, this production will be premiered in spring 2022. In the meantime, Laura will be touring with Neo-Fanfare 9x13, Dutch National Opera and Ballet with GOUD! and the Sonnevanck Theater with Koning Bowi.
Laura is madly in love with her custom-made, all white, Bogdan Bacanu Signature Marimba and is happy to be an ADAMS artist since 2021.

For more information about Laura and her projects: www.lauratrompetter.com