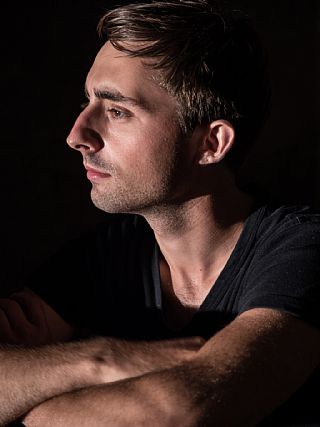 Dominique Vleeshouwers is a young Dutch maker and percussionist. As a percussionist he is known for his versatility. Next to his specialisation on classical percussion he has got a big love for drums from all over the world. As maker he develops out-of-the-box concepts with his company Combined Creatives.

Dominique is an international percussion soloist. He is the winner of the first prize, the press prize and the audience award of the TROMP international percussion competition. He
graduated cum laude with project ‘Child Soldier’ and won the AHK art prize, a prize for the most outstanding exam of all the art schools in Amsterdam. As a soloist he played with the
Asko||Schönberg ensemble, Nederlands Kamerorkest, the Nizhny Novgorod Philharmonic Orchestra and played in the international chamber music scene like the Moscow
Contemporary Music Ensemble, Canto Ostinato with Ivo Janssen in a sold out main hall of The Concertgebouw, Nederlands Blazers Ensemble and a carte blanche in the small hall of
The Concertgebouw Amsterdam. During Amsterdam Dance Event in 2013 he performed a minimal live set together with DJ Patrice Bäumel in a sold out Concertgebouw. Also he is an
extra player with the Royal Concertgebouw Orchestra.

Dominique is co-founder of Combined Creatives. As a collaborative collective of creative minds - from musicians to filmmakers, designers to copywriters, photographers to directors –Combined Creatives strives to develop out-of-the-box concepts and make them reality. We do everything we can to give our Creatives the space they need to focus on being creative by taking care of their bookings and providing multiple management services. He was founder and artistic leader of ensemble Judique from 2012-2016.

Dominique teaches at the Hochschule für Musik in Detmold and the Sweelinck Academy at the Conservatory of Amsterdam in the team of Percussion Friends. He was a guest teacher in
many international conservatories all over the world. Dominique got support from the Prins Bernhard Cultuurfonds en Stichting Eigen Muziekinstrument for his percussion instruments.