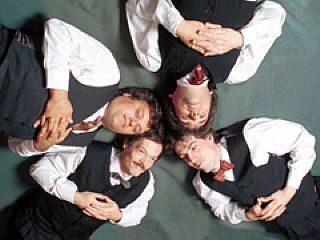 Amadinda Percussion Group has been formed in 1984 in Budapest by four musicians, just after having graduated from the Ferenc Liszt Academy of Music. When founding the ensemble central point of their activity has been double. On one hand to present masterpieces of percussion music, unknown to the Hungarian audience so far, on the other hand to perform the music of Hungarian contemporary composers in their country and abroad. One of their principal intention is to inspire Hungarian and international composers to create new pieces.

During the recent years three more new elements have been added to their aims: research of traditional percussion cultures, composing new pieces by the members of the group and transcribing outstanding pieces of music history for percussion instruments. From the very beginning Amadinda has cooperated with Adams Musical Instruments and world famous artists like John Cage, Bruno Canino, Peter Eötvös, Rosemary Hardy, András Keller, Zoltán Kocsis, György Kurtág, György Ligeti, András Schiff. Nowadays Amadinda is considered as one of the most original and versatile percussion group all over the world.
Amadinda is: Zoltán Rácz, Zoltán Váczi, Aurél Holló, Karoly Bojtos.