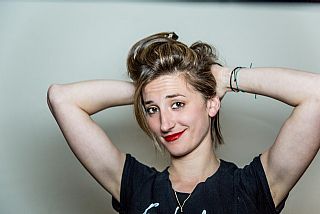 Winner of many prestigious prizes, such as the First Prize of the Standard Life OSM Competition or the Fondation Banque Populaire de France, she has proven an extremely high musical and technical level. She has also conceived, staged and performs in 5 shows (Mélange à trois, Zeee Match, La Perle, 400 ans sans toi…, L.O.V.E.) while also playing in more conventional musical ensembles, such as a tango ensemble along with Jérémie Buirette on accordion and Juan Sebastian Delgado on the cello. Her unique artistic vision brought festivals as the “Biennale Musique en Scène” or the Colombian Percussion festival “FOSBO” to commission her shows.

In July 2017, Krystina along with musicians Katy Lafavre and Pierre Bassery in Zeee Match! and Bryan Eliason in 400 ans sans toi… will take over the streets of the internationally renowned theater festival “Avignon OFF”. It is thanks to their multidisciplinary shows that this team can present high musical quality in a theater festival, offering a different vision of the stage to a broad audience (over 1.5 million entries to the festival each year!). In May, June and September 2017, Krystina will share the stage with renown marimba artist Vassilena Serafimova for dazzling marimba duo performances.

Along with the ground-breaking Colombian percussionist Tupac Mantilla, they are working on the translation to French of the interactive Body Percussion method ‘Percbody’ and on new approaches to artistic pedagogy with the Percuaction Global Percussion Network. Her upcoming projects for 2018 include the creation of two new shows, again pushing her own artistic limits. The first will explore and destroy the stereotypes of classical and operatic music while the second show will bring on stage two facets of Krystina: percussion and rock climbing. She is also working with percussionist and composer Jean-Pierre Drouet, to whom she commissioned a new solo work for her doctoral final recital.