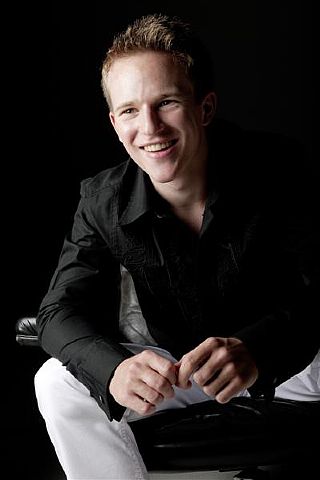 "A talent of the century, simply unbelievable"
- Ivo Radakovich

"But this young musician also shows a musical naturalness, technical mastery and dazzling feeling as well as a strong presence on stage to reveal an outstanding personality on stage: excellent. Sietzen naturally received most of the applause at the concert on thursday."
- Karl Harb, Salzburger Nachrichten

"A great master of the small facets"

"Sietzen sublimely knows how to present this sophisticated and demanding music. With highest concentration he even brings out the work‘s smallest facets, a brilliant performance"
- Rafael Hummel, Schwarzwälder Bote

Till age 13 he won ten first and numerous special prizes at the Prima la Musica Competition, the Raiffeisen Klassik Preis given by the University Mozarteum including a special prize for outstanding accomplishments and he was finalist and third prize winner at the International Marimba Competition Linz 2006, where he was also able to clinch the Yamaha Audience Award. Christoph is an award winner of the International Summer Academy Mozarteum and played as the youngest in the final concert in the frame of Salzburg Festival, which was recorded and broadcasted by Austrian radio station ‘Oe1‘.

Since then his touring schedule has taken him to Germany, Austria, Spain, Italy, the Netherlands, Czech Republic, Bulgaria, Romania, Hungary and China in renowned venues like the Konzerthaus Berlin, the Konzerthaus Vienna, the Brucknerhaus Linz, the 'Grosse Saal‘ Mozarteum, the Salzburg Festival hall or the Atheneum Bukarest, where his concerts have been met with high critical acclaim, and performed with well-known artists like Bogdan Bacanu, Peter Sadlo, Emmanuel Sejourne and Momoko Kamiya.

Composers like Alexander Mullenbach or Thomas Heinisch have written pieces dedicated to him.

He is a member of The Wave Quartet, founded by Bogdan Bacanu in 2008, that soon performed in important concert halls in Europe and Asia, where they met enthusiastic resonance. Already in the first concerts the Quartet had followed their passion for Baroque Music and performed a Concerto for originally 2 harpsichords by Johann Sebastian Bach. Their respectful and historically informed approach enthralled public and critics. Since then baroque music embodies a focus in the Quartets repertoire.

In order to that, the Quartets debut CD ,Aurora Borealis‘ was followed in 2009 by a recording of all three Concertos for 2 harpsichords by Bach, Peter Sadlo was hereby conducting ,Salzburg Barock‘ on period instruments.
This fascinating fusion of 2 ages also received great regards.
The follow-up project ,Senza Ripieno‘ impresses with mostly unpopular, but precious baroque works, without accompaniment, and very intimate.

With the Mozarteum Orchestra Salzburg under Carlos Domínguez-Nieto the Quartet made their debut with 3 concerts in the Great Festival Hall Salzburg and with the Orchestra Romana de Tineret under Christian Mandeal in the Atheneum Bucharest, which they received standing ovations for.

Highlights of the upcoming season will be a Japan-Tour, concerts in th USA as well as a coorperation with the Austrian film composer and producer Hannes M. Schalle.

Christoph Sietzen is endorser for the Dutch instrument manufacturer Adams.