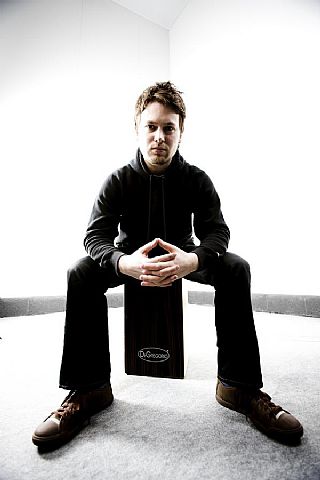 One of Britain’s most diverse percussionists, Joby is best known for his virtuosic, often lissom performances, daring collaborations, extensive education work, and regularly appears throughout Europe, the USA and beyond.

Joby commits much of his time to his own projects, most notably the audio visual collective Powerplant - with sound designer, Matthew Fairclough and visual artist, Kathy Hinde - where the worlds of minimalism and electronica collide. Since 2001 Joby has been at the forefront of Britain’s leading percussion group Ensemble Bash and performs regularly with several duo partners including oboist, Janey Miller as New Noise and cellist, Matthew Sharp as Uncharted. 2014 sees a new collaboration with The Smith Quartet and new commissions from Graham Fitkin and Will Gregory.

Dedicated to the development of the percussion repertoire, often in combination with electronics, Joby spends much of his time commissioning and recording new music. Recent highlights have included extensive tours with Peter Gabriel’s New Blood Orchestra, the premiere of Gabriel Prokofiev’s Concerto for Bass Drum and Orchestra and releases of Powerplant’s 24 Lies Per Second and ensemblebash’s A Doll’s House both on Signum Classics.

Each year Joby gives master-classes and leads numerous creative workshops for organisations such as the National Youth Orchestra of Great Britain and the Percussive Arts Society; focusing on rhythm, composition and improvisation, often using West African music as the stimulus. From 2004 to 2012 Joby was professor of percussion and director of percussion ensembles at Junior Trinity College of Music, Greenwich. Joby studied at the Guildhall School of Music & Drama, London.