Born and raised in L.A., Mark Schulman became interested in pursuing music as a mere toddler. At age 3, he witnessed the phenomenon of Beatlemania: "…I remember seeing a repeat of The Beatles on the Ed Sullivan show with my brother and my folks. I saw Ringo playing the drums and something resonated so deeply with me. Then I saw all the screaming girls, and at that moment, I thought to myself, 'I want THAT!"

Mark is the newest old member of FOREIGNER, having been in the band 1992-1994 and in 2000. “I feel like I’ve come home now that I’m back in the band!  This is by far the greatest incarnation of the band since I joined back in 1992.  I'm honored to be onstage with these guys.”

Mark is a first call drummer for world-class rock, pop and jazz artists.  Mark has been the beatmaster for P!NK and her ‘I’m Not Dead’ and ‘Funhouse’ tours.  Mark’s resume reads like a "Who's Who" of international Rock n' Roll royalty including acts such as SHERYL CROW, STEVIE NICKS, DESTINY'S CHILD, BILLY IDOL, CHER (Mark was drummer on the ‘Believe’ and ‘Farewell’ tours, two of the most-attended tours in music history) UDO LINDENBERG and EIKICHI YAZAWA.  He has drummed with VELVET REVOLVER at Ozzfest and for crowds of 200,000 at Glastonbury Festival with SIMPLE MINDS.  Mark is the recipient of numerous Gold and Platinum discs and has appeared on nearly every American and European variety show on television including David Letterman, The Tonight Show, Conan O’Brian, American Idol, Paul O’ Grady, X-Factor, Wetten Das and more.

Mark has launched some new websites: http://rockerscollective.com/ and http://markschulman.us/.  The first site represents Mark's all-star line-up of a band of the greatest musicians on the planet playing the coolest tunes ever recorded!  The second site is Mark's site with videos and information about Mark, the clinician, motivational speaker and break out speaker!

Mark is a master drum instructor. As a result of his clinics, private lessons on his days off while touring and the success of his new DVD, Mark has been getting many international requests for drums lessons and recently began giving online drum lessons on skype from his recording studio in Venice California. This is proving to be such a wonderful success that Mark has decided to open this up to drummers of all levels across the world! Contact Mark now at [email protected] to set up a lesson as his time is booking up quickly. For online drum lessons check http://markschulman.us/online-drum-lessons/,

Schulman is a classically trained cellist and as a teen, played with the Los Angeles Junior Philharmonic.  He is actually playing cello on the 2009/2010 P!NK tour!  He is also a trained audio engineer and studio co-owner of WEST TRIAD RECORDING STUDIO in Venice, California.   As an active educator, Mark taught at the LOS ANGELES MUSIC ACADEMY and as one of the world’s most sought after drum clinicians hosting clinics in countries around the world.  Mark has just produced his first DVD for Hudson Music entitled, ‘A Day in the Recording Studio.

A Do-It-Yourself Guide to Recording Great Drum Tracks for Drummers and All Musicians’.

Music is not Mark's only driving force; he was the chairman of the board of directors of Create Now!, a non-profit organization founded in 1996, to help change troubled children's lives through creative arts mentoring.  A cancer survivor himself, Mark has also motivated children and teens through his work doing seminars with the RONALD McDONALD HOUSE and benefits for the TEENAGE CANCER TRUST in the UK.

Mark’s love for inspiring others is shared through his corporate seminars and his signature Drumming Recording Seminars.  Mark also wears the hats of host, MC and keynote speaker, appearing on television, at live events and major corporate conventions for clients such as IBM, Cisco, Aveda,  and Teenage Cancer Trust. 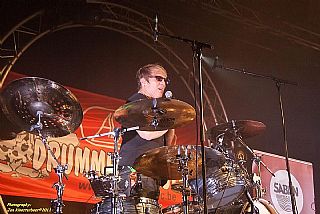 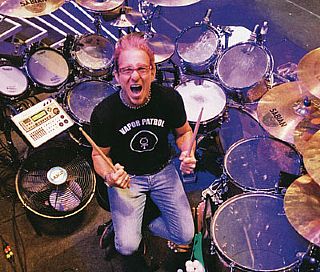