Virgil Donati was born in Melbourne Australia, and got his first drumset at age 3.

He started playing right away with his fathers showband, and kept on doing these shows until he was around 6 years old. He began taking lessons at age 7 with Brian Czempinski and later Graham Morgan,- now a legend in the Australian drumming community.

Joining his first rock band at age 15 was surely the right choice for the young drummer. The band was called `Cloud Nine`, later to become `Taste`.

Donati left school when he was 16, focusing mainly on the drums, but also piano, and practicing hard every day!

Playing 6 nights a week with `Taste` was what really “got his chops together”. Australia was very isolated as far as instructional books and big international tours, so he had to rely on self-motivation and listening to records.

With his fathers choice of records, including Louie Bellson and Buddy Rich albums, Virgil quickly became a fan of those great jazz drummers, trying to emulate their solos.

The first rock drummer to make a big impact on him was Ian Paice of `Deep Purple`. Donati was “blown away by his clarity and power”,- something for which he later would become famous himself.

Practice became a way of life for Virgil, who tried to learn as many different styles as possible, enabling him to cope with any musical situation he was confronted with!

At age 19 Virgil travelled to the U.S. to study with Philly Jo Jones, and at Dick Groves School in L.A. He also took lessons from snare drum specialist Murry Spivak.

Returning to Australia at age 21 was where Virgils career took off! Playing jazz with Alan Zavod and Brian Brown,- and rock with Peter Cupples band, he was a busy touring and session drummer Down Under.

His own pop band, `The State` turned into `Southern Sons`, which led to Virgils first taste of international fame.

The big break came in 1995 where Virgils first solo album `Stretch` was released to a stunned community of drummers worldwide, not knowing what had hit them!

Donati revealed a new approach to double bass drumming, doing stuff no one had ever done before, like doublestrokes on double bass at uncanny tempos!

Virgil moved to the U.S. in 1996 to take his career one step further, and it paid off! Recording and touring with the likes of Tina Arena, Steve Walsh, Tribal Tech and Steve Vai, is now his daily standard, as he continues to push the limits of the instrument to new unbelievable levels. His own band Planet X is arguably the most advanced fusion group, setting new standards for other musicians to follow!

Virgil Donati has not only taken doublebass drumming to alien levels, but the combined experience of this amazing player has to be seen to believe it! 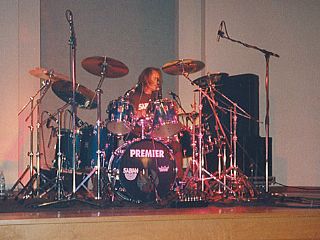