In the early 1940's, Jim began working on a drum instruction book that was eventually published in 1948 as Advanced Techniques for the Modern Drummer, Volume I, Coordinated Independence as Applied to Jazz and Be-Bop. Shortly thereafter, Jim had to have a pair of drumsticks in his back pocket at all times in case he was called upon to demonstrate a particularly difficult passage and to prove that he truly could play every pattern in the book! Advanced Techniques, which is now known simply as "The Chapin Book", became the most important drum set text ever written and is still in print today. It was recognized in 1993 by Modern Drummer magazine as one of the top 25 drum books.

From the 1940s through the 1960s, Jim performed and toured with a variety of bands, including the Glen Gray and the Casa Loma Orchestra and groups led by the likes of Mike Riley, Woody Herman, Tommy Dorsey and Tony Pastor. He also performed on occasion with his sons, Tom, Steve, and the late Harry Chapin who was one of the top singer-song-writers of the 1970s and a founding member of the World Hunger Year. And he has led his own groups for the past 20 years.

In the past 10 years, Jim has found a second career, as he has been "discovered" by a new generation of musicians that hunger for the depth of knowledge he possesses on drummers and drumming. He spends the majority of his time traveling around the world teaching and presenting seminars and he is a fixture at music trade shows and percussion conventions.

Because of his staying power, Jim is taken for granted. Through times of "here today - gone tomorrow" artists, he has always been there. During the past 55 years, he has observed, studied and analyzed every great (and not so great) drummer. He was there almost from the beginning of modern drum set playing and that will never happen again. 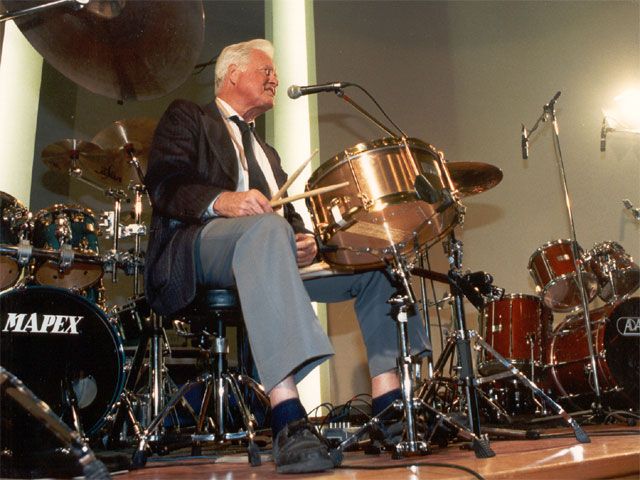