Ernst van Ee started playing drums as a young lad in his native town Rotterdam and for nine years Ernst followed music lessons. His first real band was called Highway Chile, a band that started out in the early eighties. Highway Chile became a well-known band in Holland, supporting bands like Y&T, Motörhead, Accept and MSG.Highway Chile recorded the album Storybook Heroes in 1982 and the mini-album Fever in 1983 and was a top-act in the Benelux. Because of internal band problems Ernst left this band in early 1984.

Together with Highway Chile guitarist Ben Blaauw he started the melodic heavy-rock band Helloïse . With this strong outfit he recorded the albums Cosmogony (1985) and Polarity (1987). Both albums are even today considered as highlights in Dutch hard rock history. When Helloïse more or less fell apart Ernst decided to change his career a bit.

He became a freelance session drummer and started doing drum clinics. That gave him the opportunity to develop his drumming skills a little bit further and to play several types of rock music. He got involved with guitar player Peter Magnee with whom he recorded the instrumental album Voodooplay. By that time the well known Hungarian guitar virtuoso Tamas Szekeres invited Ernst to play on his albums and tour with him as well. Van Ee played on three Tamas records, giving the Hungarian guitar player's music a much needed and very welcome kick up the ass.

Come the nineties Ernst had built up quite a reputation as being a powerhouse that would come in and help you solve your musical problems. This troubleshooter helped out Vengeance on their farewell tour, toured with Yugoslavian guitarist Misha Calvin, also helped out current Elegy singer Ian Parry by playing in his live band and some of his albums. Furthermore he recorded and toured with the death metal band Threnody, which was a whole different musical ball game. Ernst also recorded all drums for the prestigious first Ayreon-album(Th finalexperiment) by Arjen Anthony Lucassen. Between all this the readers of the Dutch magazine Slagwerkkrant (a magazine specialized in drumming and percussion) voted Ernst van Ee many times as best heavy-rock drummer off the Benelux. In 1996 Ernst was obviously involved when Helloïse decided to reunite. When the first two Helloïse albums were released on CD for the first time in Holland and Japan, it was Ernst who suggested to support the releases with a big club tour. One thing led to another. People wanted to hear new material, so the band recorded a brand new album in the original outfit titled A Time And A Place For Everything.Another big tour followed and the band decided to record an album that would fit perfectly in the over the years slightly changed heavy-rock climat.The album had to be more bombastic and progressive.In 2001 the album ,called Fata Morgana,saw the daylight!

However,the new millennium kicked off with Ernst Van Ee's first solo-album called Powerplay(later on in Europe released as Dance with an angel). The album shows all of his talents behind the drumkit and more.He also wrote most off the songs(together with Peter Magnee)and produced the album. The album contains instrumental and metal orientated vocal tracks. On Powerplay Ernst also pays tribute to his own youthheroes Cozy Powell and The Sweet. Both names had a big influence on him, especially in his younger days. Ernst, always the guy in the past to come in and help out, now had to call in some help which he received from long time friend and guitarplayer Peter Magnee, power singer Robert Soeterboek (well known from Ayreon),Pete Lovell(Picture,Emergency) and Helloïse singer Stan Verbraak. Powerplay is a fine heavy-rock album and could be a blue print for younger drummers. 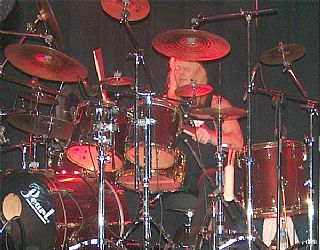 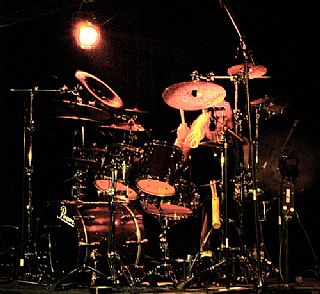