Born February 24 in Elkins WV, Steve Moore has built his entire life around a childhood dream. After seeing Chuck Berry on TV at age 5, Steve begged his parents to let him take guitar lessons. One year later, he was playing all of his favorite songs on guitar for his family. For the next three years Steve continued to study guitar and banjo, along with the piano. At age 9 the school band director gave his class a music test and tried to talk Steve into playing in the school band. Steve ignorantly said, “horns are dumb,” and walked away. The director being unsatisfied, called Steve’s parents the next day, and told them their son had an amazing sense of pitch, and asked that he reconsider. Steve finally gave in and joined the school band under the condition that after six months of playing the trumpet he would be permitted to switch to the drums. Six months later, he would reprioritize his life forever!

Steve performed in the usual school band programs and garage bands though his teens. By high school he was playing every weekend with the areas best bands. However, he soon became restless with merely playing on the weekends and realized that West Virginia was not exactly the music capital of the world. In order to make a living playing music, he would have to relocate.

For the next six years, Steve moved around the North East working in styles from progressive speed metal to punk. Influenced by drummers like Neil Peart, Mike Portnoy, and Dave Lombardo, he sharpened his skills at playing with drum loops, odd meters, and polyrhythms. Steve was recording albums and touring (here and there), but was still not making a living playing drums. To support himself he would wash dishes and work in factories. A recording engineer, feeling sorry for Steve, let him sleep on the studio floor for six months in return for his drum tracks. Not exactly what he had in mind when he left West Virginia, but it would have to suffice until he could get a road gig. Steve had learned at a very young age, that most people hear with their eyes…and was not too proud to use this to his advantage. He also noticed that people often associated with spectacles, or “characters,” much like “Ringo Star.” He decided against the cookie cutter approach, and tried to be as OVER THE TOP as possible. One way or another, he WAS going to be noticed…

In 1997, a variety showband called “Rick K and The Allnighters” hired Steve on the spot. The band had a Vegas Style approach, with lots of glitz and flash. Not only were they eager to showcase Steve, they were also established, and in a position to offer him 150-200 dates a year. Steve was playing everything from 50’s and 60’s, to country and pop. While traveling, he would study drummers like Krupa, and Rich, and take notes on their showboating and mannerisms. Steve was finally touring the country, and making a good living as a professional musician.

In 2004, he released his first DVD entitled Over The Barrel. With Steve’s unorthodox stick flips and twirls, the DVD was an immediate success and sold over 2000 units in the first 2 months. Soon after, he was featured in DRUM! Magazine. After viewing the DVD, Waldo the Squid was quoted as saying that Steve was "...twisting, twirling, stick flipping, and flailing like a Vegas version of Tommy Lee."

Steve is now endorsing major companies, with Ludwig being his greatest prize. He even has his own signature drumstick with Pro-Mark. After all the years of struggle and hardships, things are slowly coming together. A far cry from washing dishes and sleeping on the floor…

Steve has made a lifetime commitment to his drumming. His past performances range from the smallest club circuit tours to a headlining show in front of 22,000 people. He has performed in hard core punk clubs as well as casinos in Las Vegas. In addition, he has been on the same bill with a wide variety of performers – from Yngwie Malmsteen and Motley Crue to Toby Keith and George Jones. He has also won numerous drumming awards, held clinics, written articles, and given private instruction. 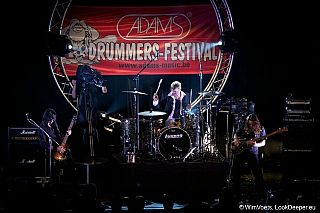