Russ Miller is one of the top touring and session drummers of today. As a Multi-Platinum, Grammy award winning recording artist, his musical versatility has led him to work with an incredible list of international artists including legends like Ray Charles through Modern stars such as Jennifer Love-Hewitt and Meredith Brooks. As a strong force on the Los Angeles studio scene, Russ was voted in the top 5 Studio Drummers in the world, 2 years in a row, by the Modern Drummer Magazine Readers Poll. He has performed on more than 250 albums and dozens of international movies.  Along with his many album credits, he has two solo albums, books and videos. In addition, Russ performs clinics throughout the world. Russ' solo projects were voted the #1 educational books and video in the world (2001-2002) by Modern Drummer Magazine.

Russ played on the Adams-Drummersfestival  with Eric Marienthal on sax, David Garfield on keyboard and John Pena on bas. More info on this band  See here 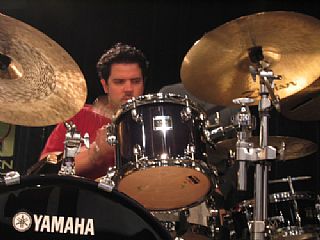