Gavin Harrison started to play the drums at age 6 influenced by his father Bobby, who was a well established jazz trumpet player and part time drummer.
By the age of 11 Gavin studied with show drummer Joe Hodson who taught him how to read and write music along with a solid base of grip and timing techniques.
He started to play professionally at 16 when he left school - and has continued to this day.
His studies continued with ex-Berklee graduate Dave Cutler late into Gavins teenage years and from there on he basically taught himself.
At 19 years old, Gavin joined prog rock band Renaissance and toured America for the first time, he later joined Iggy Pop in 1986 for a world tour.

Around this time Gavin began working as a session drummer in London (where he is based) and went on to record successful albums for Sam Brown - Black - Gail Ann Dorsey - Tom Robinson. He also met local guitarist Jakko M Jakszyk and together formed the critically acclaimed Dizrhythmia project along with bassist Danny Thompson and Indian percussionist Pandit Dinesh.

By the early 90s Gavin had joined British funk group Incognito and recorded their most successful album Inside Life with the hit single Always There featuring Jocelyn Brown.

Shortly afterwards he was invited to play and record in Japan with Yasuaki Shimizu and then to Italy to tour and record with Alice, Eugenio Finardi, Fiorella Mannoia, Franco Battiato, Raf. Gavin was starting to gain some real interest in the Italian music scene and started to work with Italys biggest artist Claudio Baglioni in 1992 along side Tony Levin on bass.

After the Italian tour Gavin was invited to join Level 42 for their last tour together and recorded a live album on the last night of the tour. Later that year he toured Brazil with jazz guitarist Heitor Pereira.

Frequent trips back to Italy to work with Eros Ramazzotti and Claudio Baglioni again and more session work there.
1997 Gavin began to work with the British soul diva Lisa Stansfield touring around the world. Keeping up a busy session schedule in the UK and co producing Sony artist Shooter.
1998 Gavin played a stadium tour with Baglioni again playing to enormous crowds in venues like the Olympic Stadium in Rome (in front of 92,000 people) San Siro in Milan (85,000) and so on around the football stadiums of Italy.

In early 2002 Gavin was invited to join the art rock band Porcupine Tree and has played with them ever since - recording the albums In Absentia (2002) and Deadwing (2005) and making several tours of the USA and Europe. 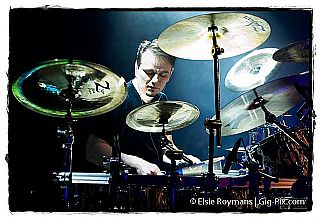