Ronald Bruner Jr.has been playing the drums since the age of 2. His earliest influence was his father, Ronald Bruner Sr., a world class drummer who has performed and recorded with Diana Ross, the Temptations and Gladys Knight.
Ron Jr. began his professional career at the age of 15, at the Theolonius Monk Institute, which opened the door to perform with many great artists such as Wayne Shorter, Dianne Reeves, and Ron Carter.

A few years later he became a regular member of Kenny Garret's band. Over the years his style has diversified, including punk rock with the band Suicidal Tendencies.

Regardless of what the future holds for Ronald, you can expect a diverse display of drumming styles and an enthusiasm and excitement you cannot deny. 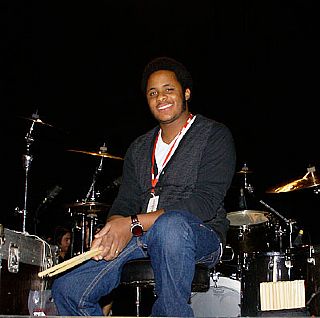