Born January 18. 1963 in Zurich, Switzerland. Son of a musician (bass player Vali Mayer), he spent his early childhood on the road traveling throughout Europe and the Far East. At the age of 2 he got his first drum set, and his first public performance took place in Hong Kong when he was only 3 years old. Growing up in the influence of a musical environment Jojo is basically self-taught (autodidact).

At the age of 18 he joined Monty Alexander's group and toured extensively all over Europe, playing all the major jazz -festivals including the North-Sea-Jazz Festival, Montreux, Nice, Antibes, Athens etc.This lead to back-up gigs with other jazz-greats such as Dizzy Gillespie and Nina Simone and introduced him to an international audience.

Jojo has also built himself a reputation as a skilled and creative solo performer/ clinician. He appeared at most of the important Industrial Events and Drum Festivals like the Modern Drummer Festival (1998 and 2005), the Buddy Rich Memorial Scholarship NYC (95), the International Drummer-Meeting in Koblenz (89, 91, 95), PASIC (96), the Montreal Drum- Fest (96), the NAMM-Show`s"Drums along the Hilton"(96), int.Slagwerkkrant Dag (96), int. Budapest Dob-Gala (94, 95), Manny`s Drum-Mania NYC (98) and the "int.Musik Messe Frankfurt"(93, 97), to name a view, were he was featured amongst the greatest names in the drumming community today (Vinnie Colaiuta, Dave Weckl, Jack de Johnette, Terry Bozzio, Billy Cobham, Dennis Chambers etc).

Residing in New York City since 1991, Jojo engaged in numerous activities including Live and Studio work. His international touring schedule has taken him all over Europe, the US, South America, The Far East and Africa. Besides his work as a drummer, he also is involved in projects as a writer and producer.

More recently, Jojo has been venturing into New York's Techno / Multimedia / Avantgarde / club scene by promoting his own weekly party event called PROHIBITED BEATZ. This new platform for live "Drum n" Bass", "Nu-Skool Breaks", "Speed Garage" and the latest stylistical hybrids and mutations in DJ culture, has also provided the back drop for his first solo project called NERVE. Described as an "endeavor in reverse engineering the textures and rhythms of the current stream of computer generated music into a live performed, improvisational format", NERVE and PROHIBITED BEATZ have created a reputation in the New York scene that already goes way beyond "a serious buzz".

Jojo Mayer's company endorsements include: Sonor drums, Sabian cymbals, Remo drumheads and Vic Firth drumsticks. Lately he has been involved as a product developer / designer for Sabian (Jojo Mayer Signature "Fierce Ride" & "Fierce Crash" Models), a consultant for Sonor's "Jungle Kit" and as a designer for Vic Firth drumsticks (Jojo Mayer Signature Model). He has also frequently appeared in advertisements, catalogues and publications for the above mentioned companies. 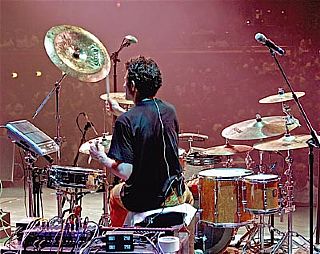 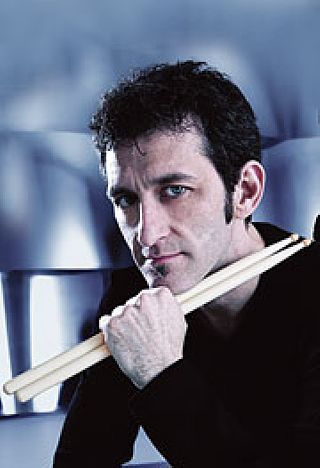 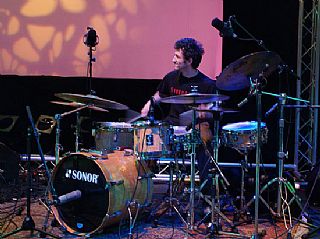