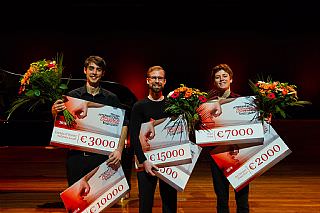 The 26-year old Kai Strobel from Germany won the First Prize of the TROMP International Percussion Competition 2018 in Eindhoven. “Polished, musically intelligent and mature. Experience and control and great lines, full of details”, according to the jury which included Michael Burritt (USA), Martin Grubinger (Austria), Momoko Kamiya (Japan), Arnold Marinissen (The Netherlands), Mark Pekarsky (Russia), Emmanuel Séjourné (France), and Ruwen Yang (China). The audience’s favourite Nikolay Ivanov from Bulgaria won the Audience Award and the Second Prize. The press jury praised British Elliott Gaston-Ross’ performance of the required commissioned work by Daníel Bjarnason. Since 9 November, 28 of the most talented percussionists from all over the world have been competing in order to gain a spot in the Finale. Besides the awards and prizes, TROMP invites its winners to perform concerts and give master classes in the Netherlands and abroad.

Kai Strobel
Kai Strobel(1992), born in Germany studied at the University of Music in Stuttgart with Marta Klimasara. Currently he studies in Austria at the Anton Bruckner Privatuniversität Linz with Bogdan Bacanu and Leonhard Schmidinger. Kai is a laureate of the German Jugend Musiziert and won the first prize and audience award in the PercussivLinz International Marimba Competition in 2015. In 2014 he was a  semi-finalist in the ARD International Music Competition. Kai performed as a soloist with the Lübecker Philharmoniker and the Württembergische Philharmonie Reutlingen among others, and recorded with Wave Quartet and trumpet player Simon Höfele.