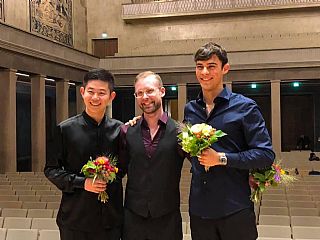 The fourth and last final of the 68th ARD-Musikwettbewerb was all about percussion. Three finalists gave their best together with the Symphonieorchester des Bayerischen Rundfunks under the batton of Eun Sun Kim, playing pieces of Ferran Cruizent and Avner Dorman.

It became the finale of Kai Strobel (Germany) who won the first prize of 10.000 Euro and the audience prize of 1.500 Euro. Head of the jury Robert van Sice praised Strobel’s strong voice on the instrument, his incredible technique and his work ethic.