Mike Portnoy was born on April 20, 1967 and raised in Long Beach, New York, where his interest in music started at an early age. "My father was a rock n' roll disc jockey, so I was always surrounded by music constantly. I had this huge record collection when I was real young and loved the Beatles and then later on Kiss. It was inevitable that I'd become a musician."

Although Mike taught himself how to play the drums, he did take music theory classes in high school. During that time he began playing in local bands Intruder, Rising Power and Inner Sanctum, the latter of which released their own album. Mike left the band after being awarded a scholarship to attend Berklee Music College in Boston.

An avid collector of many things, Mike has a vast array of Dream Theater memorabilia including bootlegs, posters, clippings and everything else under the sun with the band's name on it. He is also responsible for capturing everything the band does on video tape and DAT. His huge video collection includes favorite films as 2001, A Clockwork Orange, Jacob's Ladder and The Wall along with episodes of The Simpsons and memorable boxing matches.

Mike says his biggest influences are Rush drummer Neil Peart and the late Frank Zappa. Other favorites include drummers Terry Bozzio, Vinnie Colaiuta, Simon Philips, John Bonham and Keith Moon and bands such as The Beatles, Queen, Yes, Metallica, Jellyfish, Iron Maidon, U2 and Jane's Addiction. He is also a fan of rap music. 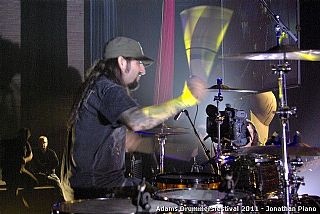