Gary Ferguson has been a serious drummer from an early age, and did  his first record date when he was 17 years old for Shirley Bassey. Ferguson began touring in the mid 70's with Etta James, Olivia Newton-John and Cher. In the eighties he continued with Cher, Les Dudek, Eddie Money, David Benoit, Gary Moore and Charlie Sexton . The nineties saw him at home busy with session work.

However, in the mid 90's, John Hiatt got Gary back out on the road followed by Glenn Hughes, Luke and Edgar, Larry Carlton and Steve Lukather and most recently the Women Rock Lifetime T.V. Special featuring Cheryl Crow, Emmy Lou Harris, The Dixie Chicks and more. Following is a list of a few of the many great artists Gary has had the pleasure of working with: 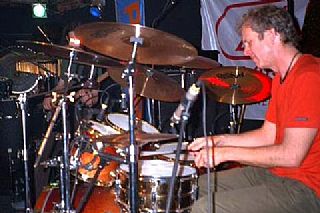