Born in Ohio and raised in Connecticut, Cindy began her musical career as a New York street performer. She spent three semesters at Berklee College of Music in Boston, Massachusetts and also studied with legendary teacher Alan Dawson. Cindy moved to New York City in the 80's and since that time, she has been seen and heard by millions of people all over the world performing with her own group and during her 11 year stint with retro funk rocker Lenny Kravitz, since 1993.
In 1998, Cindy released her first drumming instructional video entitled, "Multiplicity" through Warner Brothers publications.
Cindy has been touted as "one of the hottest drummers in the business, by the Star-Gazette and is regarded as one of the top drummers in the world. She is a solid, dependable drummer who can easily move from straight-ahead jazz to rock to funk and back again.
She's upheld the backbeat and created texture for a veritable "Who's Who" in jazz: Jackie McLean, Joe Henderson, Don Pullen, Hugh Masekela, Pharaoh Sanders, Sam Rivers, Cassandra Wilson, Angela Bofill, Bill Laswell, Buckethead.
In early 2000, Cindy released the latest of her several acclaimed solo albums entitled "Works on Canvas." She released her seventh solo release "Someday" in 2004.
"Some drummers act, some react. Some keep time, others create it. Cindy Blackman is among the few who can...." says Mike Zwerin of the International Herald Tribune. One listen to her latest release, Works On Canvas (featuring J.D. Allen-Tenor Saxophone, Carlton Holmes-Piano/Fender Rhodes, George Mitchell-Bass) and you'll agree.
Talking Drum said, "You can be assured that Ms. Blackman will be around for a long time to come.." She is thunder. She is fire. She is energy. She is passion. She is Cindy Blackman.
According to Cindy herself, "The life of music is bigger than all of us." 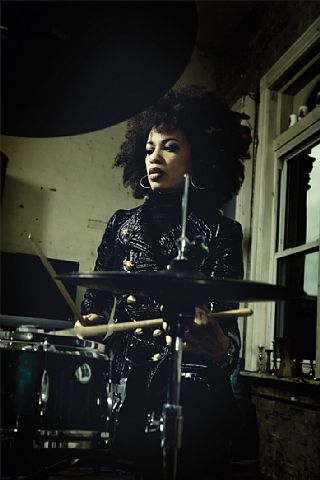 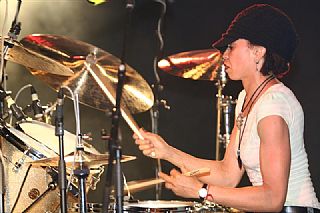 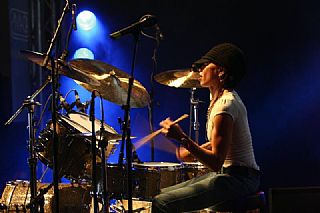 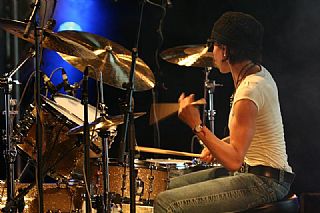 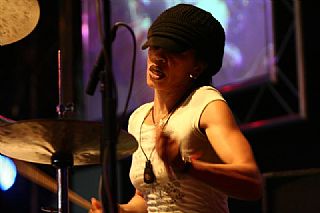