Raymond Lee "Ray" Luzier (born June 14, 1970 in Pennsylvania) is an American drummer. He is the drummer of the band Korn, becoming a full-time member of the band in April 2009.

Ray Luzier was raised in West Newton, Pennsylvania, a small town an hour outside of Pittsburgh. He began to playing drums at age five, and although basically self-taught, he participated in high school jazz, concert, and marching bands.

After graduating in 1988, Luzier moved to Hollywood, California to pursue an education at the renowned Musicians Institute. He graduated in 1989 with a degree from MI's Percussion Institute of Technology. Luzier later returned as an instructor at Musicians Institute (1992–2001), where he taught rock-style drumming classes and gave private lessons.

Luzier is well known for his work with David Lee Roth, who he played drums for from 1997-2005. Luzier has also played with The Hideous Sun Demons, a progressive-rock/fusion trio formed with DLR bandmembers Toshi Hiketa (guitar) and James LoMenzo (bass).

In 2004, Luzier released an instructional DVD. It features a wide variety of lessons, including double-bass technique, drum fills, motion exercises, and warm-ups. It was released through Hal Leonard Publishing Co.

In January 2006, Luzier appeared at the NAMM in Anaheim, California with Billy Sheehan and Toshi Hiketa. Robert DeLeo and Dean DeLeo of Stone Temple Pilots appeared at the same NAMM venue as part of an impromptu band put together by Steve Ferrone. After seeing Luzier's performance, the DeLeo brothers invited Luzier to join Army of Anyone, the band they were putting together with vocalist Richard Patrick of the band Filter.

In 2007, after original drummer David Silveria had left (in 2006), Korn hired many touring drummers including Joey Jordison of Slipknot. Jordison left due to preparation for the recording of Slipknot's new album All Hope Is Gone. Consequently, Korn was then looking for a new drummer; and Luzier reportedly flew to Seattle to audition for Korn with Munky and Fieldy. When told to learn only five of their songs, Luzier learned 30. After an amazing audition, Ray was immediately invited to join Korn.

Luzier played his first show with Korn on January 13, 2008 in Dublin, Ireland and played with the band throughout 2008. Korn recorded their ninth studio album together with Ray and their original producer Ross Robinson. Korn frontman Jonathan Davis revealed that Luzier is now an official member of the band. Ray made "UltimateRockGods" Artist Of The Month for July.

Luzier also played live with Stone Temple Pilots for a couple of the band's shows on their reunion tour in October filling in for drummer Eric Kretz, who took time off due to the death of his father.

In November 2010, Ray played drums for the immensely popular Japanese band, Kat-Tun on their song 'Change UR World'. It was Kat-Tun's 13th number 1 single on the Oricon charts. 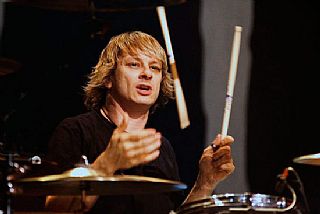