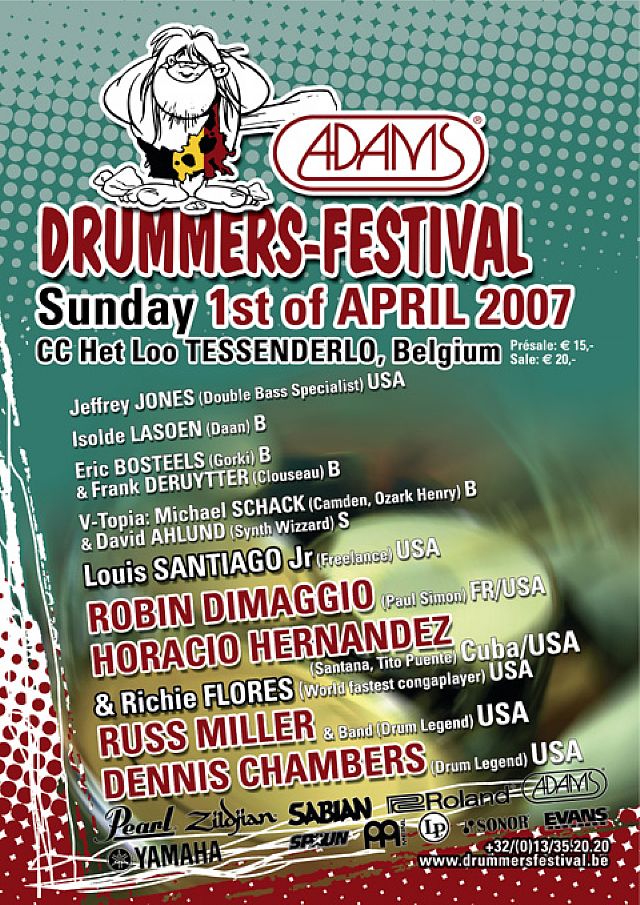 We saw nothing but happy, smiling faces during the Drummers Festival of 1 April last. It could hardly have been otherwise with such a bill.

On the main stage top of the bill Dennis Chambers came up to all expectations, while Russ Miller and band had earlier been very much to the audience’s taste. Top saxophonist Eric Marienthal reminded us exactly why he is one of the most sought-after saxophonists of the day. Robin DiMaggio opened the festival with unimagined energy. The (all too brief) appearance of Horacio Hernandez with his percussionist Richie Flores also created a very cheerful atmosphere in the hall, and rightly so. V-Topia closed in a driven electronic atmosphere.

The congenial little Club Stage was the perfect launching pad for the successful experiment by Eric Bosteels and Frank Deruytter on bass and sax. Cesar Zuiderwijk also let his hair down and soon had the audience laughing. Jeffrey Jones showed his talents as a respected drum teacher, but the big revelation of the festival was undoubtedly Louis Santiago Jr..

In other words, a very successful Adams Drummers Festival, thanks to a superenthusiastic audience with super drummers on the stages! Write it down now in your diaries for next year: Sunday 16 March, CC Het Loo Tessenderlo, Drummers Festival 2008!

More pictures other VIPS... and even more...