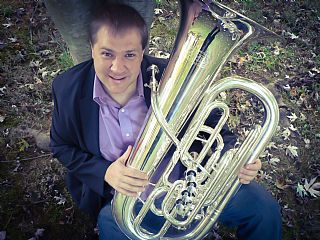 Dr. Vivio is an active performer presenting recitals, master classes and lectures around the United States and Europe.  Dr. Vivio is also a member of the Belmont Brass Quintet, and has subbed with the Memphis Brass Quintet, Memphis Symphony, Prague Symphony, and was the principal tubist of the Altoona Symphony from 2003-2005.  He has performed solo recitals at the Northeast, Midwest, Southeast, and Mid-South Tuba and Euphonium Regional Conferences.  As a researcher and pedagogue, he has given lecture recitals at the Washington D.C Army Band Tuba-Euphonium Workshop, and the International Tuba and Euphonium Conference in Linz, Austria.